This is a very strange topic: even though a cursory google search using the words “multiple php versions apache” spits out a considerable amount of informative howtos and blog entries, when I recently mentioned in a mailing list that it is in fact quite easy to have multiple php installs running in parallel using Apache virtual hosts, I immediately received a private request for my configuration.
Well, here it is, along with a few details on how to set up the complete environment.

The desired goal is having “alot” of php installations running in parallel, so that php scripts can be quickly tested against as many versions of php as possible. It is very useful f.e. when

There are many different setups that can be used to achieve this result (a big list is available on Gentoo docs, courtesy of Andreas Korthaus).
My preferred setup is: use a single apache instance, with a single php version installed as module, and many versions installed as cgi applications. Advantages:

The main disadvantages are:

The instructions below are geared to a windows environment with Apache 2, but converting them to linux is left as trivial exercise for the sysadmin.

END_OF_DOCUMENT_TOKEN_TO_BE_REPLACED

A simple question: why is the word “docbook” always followed by “toolchain” instead of “editor”? Why can’t I just write my documentation in xml as easily as I do with Ms Word and be happy with the results?

The answer is unfortunately not so simple. The core of the problem lies in the flexibility provided by the docbook format. After all, it is an xml dialect, which can be used to write (almost) any kind of technical documentation and produce (almost) any kind of output. Existing graphical editing and conversion tools either cater only to a specific category of documents or suffer from a generic interface that does not introduce significant productivity gains.

What I needed to document my php project was:

After struggling with a couple of buggy/incomplete editing and conversion tools, being somewhat of a coder myself, I decided to roll my own solution.

Here’s how I set up my toolchain:

END_OF_DOCUMENT_TOKEN_TO_BE_REPLACED

42%How Addicted to Blogging Are You?

So long, and thanks for all the fish, err… the great support and fantastic times together! 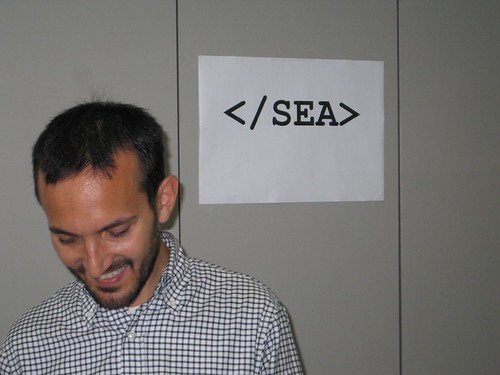 As everybody in the php world is bound to know, PHP4 is still the dominant platform on the net, despite its age and many shortcomings. Notwhistanding many improvements in speed, security and functionality, PHP 5 has seen so far a less-than-stellar adoption rate.

There have been a lot of discussions in the blogosphere about this “problem”, with the most basic explanation being:

Other people refer to PHP as victim-of-its-own-success: PHP 4 was good enough for everybody, so a lot of people do not feel compelled to upgrade.

While I am generally in favour of extreme ABInex and API stability (I have servers running php 4.0.4, pl1 mind you…), I have to admit that the current situation imposes a heavy burden on the developers of php libraries and applications: the coder has to cater to the quirks and bugs of every possible php version, and either avoid any enhancement that has seen the light roughly in the last 5 years (since the release of php 4.2) or resort to provide alternative code paths for the less-fortunate (the php-compat package on Pear is a great help if you’re into defensive coding).

The best proposal I have seen so far to this situation comes from the Drupal mailing list:

PICK A DATE FOR PHP 4 DESUPPORT AND ANNOUNCE IT TO THE WORLD WITH ENOUGH ADVANCE.

The chosen date has to be agreed upon by most major php application teams (this is the hard part), but most of them, have been planning the upgrade to php5 anyway.

One last question remains open: WHAT SHALL WE CALL THE DAY THAT PHP4 IS PUT TO REST?

I have updated the article comparing the different php libraries that allow encoding/decoding of JSON data.
Besides testing the latest version of all the libraries involved and briefly summarizing the evolution since the november test, he new page has benchmark results for php 4.4.

Tales from the trenches.

Two companies develop a communication protocol to exchange information between their respective systems. SOAP is picked up, presumably because of all its enterprise-trendiness.
One company builds a J2EE application, the other one a single C++ builder win32 exe. Both sides can receive and send messages.
The applications get tested by the developers while at their respective office, and declared ready to go….

…but fail to exchange a single message when deployed in the production environment, which includes quite a few extra devices:

The developers have no clue as to what might be causing the problem, and are prone to point fingers against the “bad firewalls”.

There is really something interesting in comparing the two approaches to development: on one side the communication protocol is completely abstracted away, so much in fact that it cannot be examined at all; on the other side the protocol is not handled at all, and old-school quick-n-dirty pragmatic coding has produced the bare minimum necessary to fake understanding the language, while in reality not being able to speak it at all.

END_OF_DOCUMENT_TOKEN_TO_BE_REPLACED

One of the little quirks the php framework developer has to face when confronted with the daunting task of writing real portable code is figuring out which global variables will be available in every single conceivable user setup (and in most of the unthinkable ones), and what kind of values they will assume.
Although the online manual does a pretty good job in describing where the environment variables are supposed to come from, and their supposed usage, it sports no single, comprehensive list of all the junk that might – or not – be filling up the “Environment” section of the global namespace.
Having wrestled with php deployments ranging from SCO Openserver (brr…) to windows to solaris 32 and 64 bits, I set up to publish my own findings.
The list can be found here: http://gggeek.altervista.org/sw/env_vars_comparison_chart.xhtml. People on slow links please note it weights in at 300k.
In its present incarnation it is based exclusively on windows installs. I plan to add some more unix goodiness later on, but any contribution is welcome (a printout of your phpinfo will do, or, in case you value privacy and security, a plain list of the values in the ‘env’ and ‘server’ sections).
The colors, more or less, indicate:

Also note that “script name” in some settings will point to php executable, not php script.
In no particular order, things that should be done before the table is considered reliable include: add a column with exaple values, testing all php setups without a php.ini file active, test with IIS in isapi mode, apache 1 in mod_apache mode, apache in ssl mode, cgi mode when run from command line, version 4 cli, linux / solaris installs, separate clearly variables from the windows environment from the more “general” ones, add some insight on usage of REGISTER_GLOBALS, variables_order, and other assorted ini settings that might influence the php environment.

Edit: (2007/02/14)
A similar table, with better formatting, can be found here, while a discussion on this topic a little while ago was here